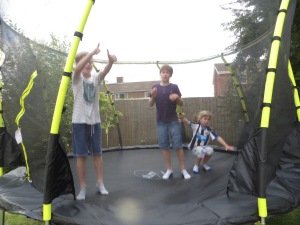 Today my husband and I built a trampoline. A trampoline was one of the ‘conditions’ my off spring made before they would agree to move house. Clearly we didn’t actually need their permission but it is good parenting (I think I read somewhere once) to make them feel that their opinions are actually valid. And anyway we were stuck for birthday ideas for Middlest and Youngest and so buying the bouncy apparatus killed several birds with one stone, without taking up any more of our indoor storage space, which whilst increased following our house move is still at a premium.

Husband had researched trampolines on line- exhaustively- as is his wont. We had estimated that the 12 foot version would be large enough to hold our three offspring but still fit in a ‘corner’ of the garden. We hadn’t actually measured the garden you understand- that would be much too sensible. We had plumped for 12 foot on a gut feel and sincerely hoped we weren’t going to experience a ‘Christmas tree’ moment. We have all done that. Looked at a fir or a spruce in the forecourt of a petrol station and decided it would ‘fit in that corner of the lounge’ before getting home and having to attack its base with a hack saw and remove the three piece suite.

Somewhere along the line husband told me the trampoline was oval. Which is a bit different. And gave me a small frisson. I wish he had disabused me of this idea before we began assembly. It would have made everything make a bit more sense. It is actually circular. Oh well.

Normally my husband and I don’t do that well building things together. In fact doing anything practical together is a little challenging. He is not ‘handy’. But he is taller than me and stronger than me. So in some ways useful.

What happens is this. I am able to understand the intellectual parts of the job quite quickly but often am physically incapable of carrying them out which leaves me trying to impart this knowledge to husband. With my limited ability to grasp the right word at the right time. It is probably as frustrating for him as it is for me. I usually  end up holding bits, which are often heavy, whilst trying to get him to understand that next part of the procedure. And I get impatient. Why can’t you just get it right man? What can you not understand about ‘Put that bit there, no that bit there, yes that bit, in the black thing, no the black thing has to be the other way round, rotate it damn it, no not that way the other way, left, no sorry I mean right, yes yes yes finally, now get the smaller thingy, nut, no sorry screw and put that in the hole, no you need to line the other hole up first, did you use a washer, no not the spring ones, the other ones, take it out and get a washer, here, here, here I have one here….Oh no now I have dropped the really heavy thing on my foot and dropped all the washer thingys….’ Etc. Every year we go camping. Every year we nearly get divorced pitching the tent.

When the trampoline boxes arrived (worryingly all three were long and rectangular and in no way oval (or even circular), that is when I think it hit me that assembly was going to be an ‘enterprise’) I toyed with trying to start the process on my own. I opened all three boxes before finding the instructions which stated that the trampoline would take 2 adults two hours to build. I was one adult with one hour before I had to leave to be somewhere else. I very nearly gave in and began the process egged on by my exceedingly excited and impatient children but thankfully discretion won out. I guess that is what makes me a grown up. The kids had to wait.

So today was our first window of opportunity when we did indeed have 2 adults and two hours. Despite my having impressed upon the kids the fact that the instructions stated it would take those 2 adults 2 hours to build all three thought it would be ready ‘after breakfast’. That didn’t allow for daddy mowing the lawn first- a sensible precaution really. Or for us having to go out to buy food and drink for an impromptu BBQ party which husband had managed to arrange almost by accident during my absence for the previous three days with the kids on a mini break. O-Kay…

So lawn mowed we began our assault. I had pre-read the instructions. Which was a ‘good thing’. In the manner of flat pack today the instructions are multi lingual. Which means they contain no words…at all… you are reliant on your ability to follow diagrams. Luckily for me these ones ‘seemed’ fairly self explanatory and I had mentally noted the pitfalls helpfully laid out with little warning signs in the booklet.

All went quite well to start with. We managed to get the frame assembled (here it would have been useful to know its actual shape but still we coped) and attach all 72 springs. In the right order. Here husband’s brute strength and my counting came into their own.

Ah and then we came to the legs. Four of them. With two attachments each. And here we hit a snag. Between us we could not get the legs on. Without previously attached legs falling off. Words would have been useful here such as….If the trampoline is not being built on a bowling green (and not a crown one at that) you are going to have issues with legs. Or…. try the legs in other configurations before giving up entirely. Or…. don’t try to build it upside down as it is impossible to turn back over without the aid of a crane. Etc

There was nothing for it. It was time for the cavalry. The offspring were roped in to help. They had started helping at the beginning of the process (muddling up the spring counting, losing bits, inappropriately wielding Stanley knives, generally annoying husband) but had wandered off in the manner of small people denied access to the really exciting tools after the first half hour or so. Middlest was now reading upstairs and occasionally leaning out of his window to shout down his enquiries about how much longer we were going to be- in that really ‘helpful’ way 9 year old boys have. But now we needed them to give themselves hernias by holding up the springy bit whilst we ran round like headless chickens trying to insert legs before one of their biceps gave out.

After about four goes we got there. Nobody was permitted to breathe or move whilst we ran round inserting screws, taking out screws and re-inserting them with washers and fetching the mole wrench to clench some bits that had been warped during our extended leg insertion process. Until it was in a sturdy enough place to risk leaving it while we went to the local supermarket to eat and gather burgers.

We got back and attacked the net part. I was tempted at one point- I  think it was when we had to undo a whole lot of work as we had done something in the wrong order (where was that hazard sign) and even my six foot (if you listen to him, really 5’11”) husband was unable to reach the ‘next phase’ – to let them bounce un-netted. That was good enough for me in the 1970’s. But then we had those BBQ guests’ off spring to worry about. Damn it.

So anyway some velcroing and hooking later, voila, a trampoline. And it only takes up about a quarter of the garden.  They went on it eagerly. During what remains of our holidays they will be spending at least an hour a day on it. At least.

And before anyone asks no I will not be bouncing myself. The assembly was a purely altruistic process on my part. I have had three children. If you need to know why I shall not be bouncing ask a mother. I am not going to elaborate here.

And those instructions need to be amended. It took 2 adults, 3 kids and a mole wrench at least three and a half hours to build. I feel a momentous sense of achievement. I think we should really unveil it at this BBQ or at least crack open some champagne in its honour, if not off its ladder.

However I am mentally and physically exhausted. And so I am having a cup of tea and writing this blog. While husband makes kebabs. Serves him right really.