Be careful what you wish for… 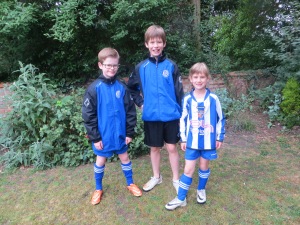 When my husband and I were deciding which school to send our children to one of our major considerations was the sports provision.

Eldest and Youngest are sports mad. And so we wanted to send them somewhere that would develop them further.

Middlest is not quite so keen. However it was still an important consideration for him too. In fact even more so.

I have the legacy of my own shocking memories of sport experiences at school. Of being labelled not good at Games within about 5 minutes of arriving. This was probably because I had glasses and was skinny. I actually quite enjoyed hockey and netball but the crippling embarrassment of always being picked last and having to sign the ‘period’ register rather marred it for me. It didn’t help that on my first day my mother sent me in with her old hockey stick. Not realising they had changed shape in the twenty odd years since her school hockey career. The fearsome Sports Mistress was not best pleased. I had blotted my copy book. And was probably the butt of staff room jokes for some time.

And so I wanted a school that would encourage Middlest even though he isn’t the best team sport player in the world. I wanted them to help him find a sport he liked and could carry on with in the longer term.

Eldest has taken full advantage and is regularly in the Rugby squad. It is a game he loves. Although he was dismayed by the new rules that do not allow him and his fellow forwards to contest a scrum. He feels he is going through the motions. I feel relieved.

Youngest gets to play and run and swim and generally do all the sports she loves. And so she does. Regularly.

And indeed the school have listened to feedback and this year are providing competitive fixtures for children ‘further down the list’. So this means even Middlest, usually happily adrift in the non-team sea during the Rugby term, is getting fixtures. He is not sure I should have been one of the many who provided that feedback. Although the match teas afterwards seem to help him get over it.

Middlest and Youngest have a minimum of four hours of Curriculum sport a week which even allowing for all that changing sees them active for at least three hours. It includes the team sport of the term, PE (variously cross country, racquet sports, gymnastics and athletics) and swimming.

Eldest clocks up just over three hours a week. He doesn’t have to suffer a weekly swimming lesson now he has progressed to Senior school. Youngest describes it as ‘pure torture’…. she seems to spend her lesson ploughing up and down in various contorted positions. Apparently it’s streamlining…

Along with that Eldest has at least two hours of club and fixtures a week. He would have another hour of Rugby on top of that but he has managed to get out of it to attend choir. Music is his other passion and he spends a lot of his time each week playing his cello and singing.

Middlest clocks up a further two and a half hours of extra curricular sport a week minimum. Including his beloved badminton. And Youngest’s tally is a mind blowing 4 hours a week. A mixture of hockey and football.

And this week on top of all that Middlest is in a Rugby match and Youngest has a swimming gala.

This half term Youngest would have liked to have fitted in an extra half hour of cross country running. Straight before football training. I put my foot down…

It is safe to say that I do not struggle to get my kids to the one hour of activity a day recommended by the Government. In fact they are well over this if you add in all the trampolining, family walks and bike rides, general running about and playground activities. No doubt Youngest will spend lunch hour today playing football on the playground.

Sundays remain a ‘day of rest’. For now. As Youngest progresses up the school she may have to switch from her Saturday football league to a Sunday one. To avoid fixture clashes. And that will mean Eldest may want to take football up again. As we will be doing it anyway. But for now I have my fingers in my ears pretending I can’t hear this…

Because the one major down side of all this opportunity is that our weeks (and I include Saturdays in that) are a complete bomb site.  And I feel weak. Both in comparison. And from the hours of ferrying and logistical quandaries and laundry and ‘encouraging’ from touch lines.

And I am never, ever going to Google ‘how too much sports affects children’…Ever…