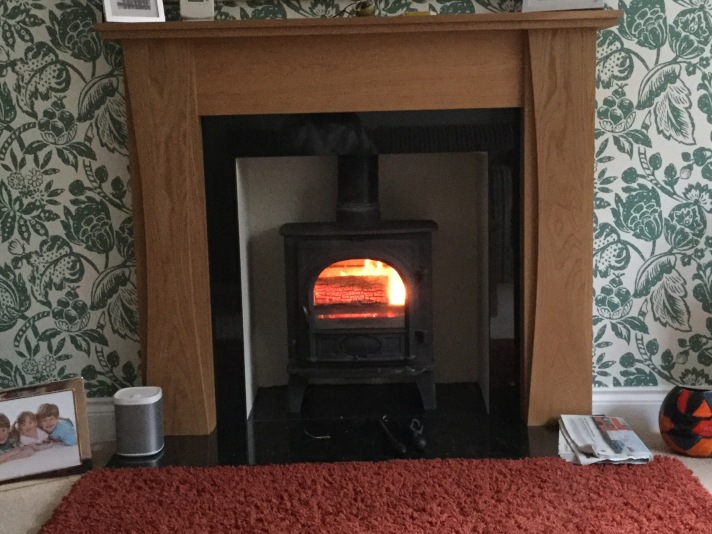 The journey home was only remarkable for being unremarkable. That seven hour marathon to get there was not repeated and we arrived back home in good time.

I don’t know about you but whenever I arrive home I am always pleased to see it still standing. Not burnt to the ground. Or broken into. It is irrational, I know. Half the village would have texted me to let me know if such tragedies had befallen my abode during our time away.  Hell they may have even called. But still it’s a relief none the less.

This was especially pertinent this time as storm Katie had hit whilst we had been away. This is a new thing here in the UK. Naming storms. We seem to have hurricane envy. Anyway Katie had dislodged the BBQ cover, moved the table tennis table and inexplicably opened the locked shed doors. But otherwise she had been kind. Ta duck.

So anyway initial inspection over I marched straight upstairs to turn on the central heating and hot water. Although the day was not that cold a week of vacancy and no heat had turned the house into a fridge, it was literally warmer outside. The kids agreed and so whilst the house warmed up they went on the trampoline.

I began the task of unpacking the boot. Quite a long winded process as we seemed to have taken most of the house on holiday and returned with more Easter eggs then was healthy.

Just as husband was off to the supermarket to rustle up some tea I noticed the distinct lack of ‘heatingupness’. The day being so warm I asked him to check the thermostat to ensure the heating would indeed kick in. It showed 11.5 degrees. So, yes, the radiators should have been warm. And the hot water tank well hot. And can I just add at this juncture that my hot water tank does not have an immersion heater and non of my showers are electric. Damn and blast. I was starting to get…a….bad….feeling…

I went into the garage. Even before I had climbed over the bikes and trailer I could see a flashing red light on my boiler. Not, I thought, a good sign. I still needed to make that perilous journey as my eyes were unable to determine the meaning of the flashing red light from any distance. Using the handy warning light key on the side of my boiler I determined that I either had low pressure (of what was not specified Gas? Water? Blood?) or a defunct pump. Or possibly both.

Neither sounded great. Of course knowing what the fault(s) maybe was(were) was in no way any help to me as no where on the boiler did it explain what to do to rectify said fault(s). Nor did the installation manual- that I subsequently located in the ‘file of useful stuff’ the previous owners of the house had left for our delectation- shed any light. In fact the manual was written in a foreign language. Corgi engineer speak I believe.

Luckily I pay a small fortune to a national gas company for boiler insurance. It took me a while to locate their phone number because my own over efficient filing system meant I failed to locate the paperwork which I had possibly misfiled after ‘constantly filling up toilet-gate’ and my computer, also redundant and unloved for a week, was refusing to ‘warm up’…there’s a theme here…

Out of interest despite two call outs from the plumbing sub contractor of the aforementioned national gas company the toilet will still constantly fill up after every flush unless one depresses both the ‘poo’ and ‘wee’ buttons of the flush mechanism simultaneously. This is a fact I find myself having to remind every other occupant of my house of. Constantly. It is only I who has the knack of reaching into the freezing cold water of the cistern to rectify the issue. Sigh.

Anyhow I called them up. Eventually. Unfortunately because I have no one with medical conditions, have two log burners and a kettle I am not considered an emergency. Tomorrow was the best they could offer. 8 til 1 or 2 til 6. Um let me think as early as damn possible please.

I set to laying out my log burners. It was not a job I expected to have to do. Piles of laundry yes. But not setting two fires. Accordingly there were no logs in the house. It is April. I had gone away thinking it unlikely I would use them again this year. Doh.

Anyway I got them going. I have never lit both together before. On going outside to collect the logs I did consider leaving the doors open to let some warm air in… I spent the afternoon oscillating between grates. The front room burner is easier to tend than the family room burner. I discovered.

By the kids’ bedtime these two rooms were warm. No where else was. I dangled fairly flammable PJs off the mantles. All we needed was a tin bath to complete the Victorian Fireside look. However we had to make do with the kitchen sink and used the kettle to get some warm water for a lick and a promise. I introduced them to the joys of hot water bottles. I only have one so they have had to time share it. I will be sneaking into Eldest’s room later to purloin it back. That smell of hot wet rubber, it takes me back it does…

All in all, excepting the cold loo seat which Middlest was very shocked about, they have found it quite fun. Middlest has a new found appreciation for the Tudors. Apparently.

I, on the other hand, have not. Found it fun. And will be glad to have my pressure sorted tomorrow and get a warm shower. In the meantime I will chuck another log on the fire and see how many of those Easter eggs I can eat without the kids noticing.

Oh and on my way to my cold bed later I must just stop by that cistern. Cheers hubby.