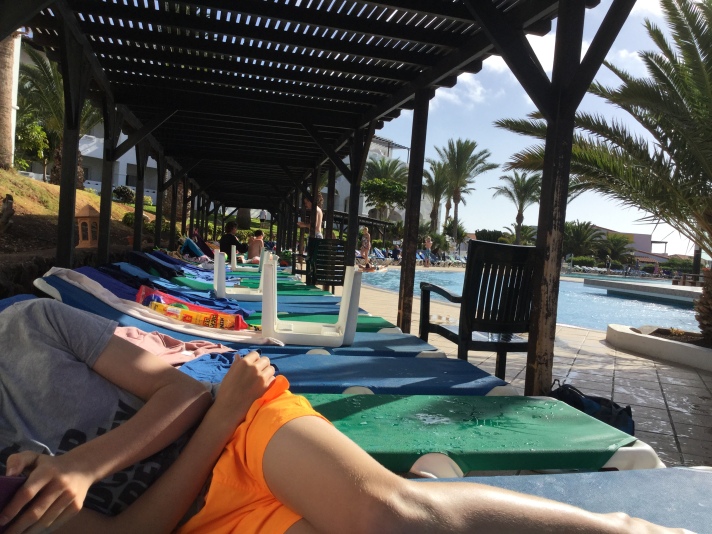 Time for another holiday missive. I cannot quite believe it has been a year since my last holiday blogs from Portugal. Such gems as Wind Up and Why are there no Aspirin in the Jungle? Please do look them up. I have limited technology here in sunny (and windy) Fuerteventura and so I struggle to provide links. Oo actually I think I may have mastered it. Let’s hope so…

For those of you that remember the latter blog it dealt with the fact that Middlest and Youngest had developed raging ear infections from over pool use and the lengths we needed to go to sort that out. Well by way of background that happened again in October in this very hotel and we spent another day of our precious holiday at doctors and pharmacists.

And so I bought them earplugs and gromit bands to wear on this holiday. Needless to say that hasn’t gone down too well. It is somewhat of a battle to get them to wear them. I actually think they look kind of cool. I would post a picture but all photographic evidence is banned.

I am a lonely voice in favour of such a get up, even husband suggested “We should play it by ear”. Not only is that a dreadful pun but I am also not sure how that would work. Until “we had played it by ear” enough for an ear infection, or possibly two, to develop? What and then wear the gromit bands? After the fact. I pointed out that if that did occur he would be getting the taxi to the pharmacy in the next town and trying to get by in rudimentary Spanish. That was enough to get him to back down. My husband is legendary for his lack of linguistic ability. I once came back from a loo trip when we were in Gran Canaria and discovered him trying to order two pineapple juices by miming a pineapple. It has gone down in Harrison folk law. I intervened. Dos zumo du pina por favor? The look of relief on the poor waitresses face was a sight to behold. I am sure it has gone down in waitress folk law too…..

I also reminded the off spring of the night of agony they both suffered. Middlest on the sofa crying. The subsequent pool ban for the rest of the holiday. The increased pain on the return flight. Apparently all this is like labour pain. Forgotten conveniently by the next time. That has cost me quite dearly. I didn’t want it to cost them. Like many many things I do that appear mean and heartless (apparently) I am doing it for their own good.

So they are wearing them. I put my foot down. And as everyone knows I am the boss. I saw a bunch of pre pubescent Germans pouring all inclusive Fanta on their heads and diving straight into the pool yesterday. I rest my case….

Anyway this wasn’t supposed to be a blog about ear infections but as always I have got massively sidetracked.

No this is a blog about sun beds.

We arrived at midnight on Saturday evening after a traumatic trip which saw us nearly miss the flight due to the M25. Needless to say we didn’t fancy getting up too early on our first day. At about 7.30 then we wandered blearily down to breakfast. Early is a relative term with my kids.

My first inkling that something may be up was when I went onto the balcony to take in the view. The view consisted of a lot of middle aged men, many in Lycra  (can I go nowhere without mamils?) reserving platoons of sun beds. I shrugged it off. In October here we had wandered down after a leisurely breakfast (by 8.30) and still been able to sit in the shade, a must for my family two of whom are very pale skinned. One of those is a fully grown man who still believes he will get a tan, despite 43 years of evidence to the contrary. The other is Middlest who spends his holidays getting more and more freckly in an endearing but ultimately futile way tan wise.

Anyway after this particular leisurely breakfast (probably the best in our All Inclusive experiences with proper sausages and bacon that is so well cooked it cracks, the only way to eat bacon in my opinion. I do wish the continent could get its collective head around the need for cold milk with tea though, not hot milk or, worse, cream and provide tea pots and proper sized mugs. That might be just me of course) husband wandered down and could only find sunbeds in full sun and then they were sandwiched between the bins and the showers.

Nevermind we carried on undaunted. After lunch I happened to be passing a family with a small child vacating their beds under the shade and I pounced securing the beds with everything I was carrying; sun hat, one towel & my sun glasses. I toyed with removing my bikini top to secure the fourth bed such was my desperation for shade, sweat having formed on the back of my knees, but thought better of it. The resort is partly naturist but it isn’t really my style…I ran back to husband and we embarked on a change over procedure.

Despite this retreat to the shade for the latter part of the afternoon Middlest still got mild sun stroke as we were to find out at 11.30 pm when Eldest pounded on the door to advise that Middlest was vomiting copiously into, luckily, the toilet.

I resolved to find shady sun beds the next morning come what may.

Anyway at 07:00 hours I pulled on shorts and a tee shirt and joined the mamils reserving sun beds. I found five in the shade further from the activity pool than everyone wanted but not bad in my opinion.

I got chatting to an English man who was arranging his towels on the run of beds next to ours. My family find it odd that I will strike up a conversation with such people. I was about to spend the day lying approximately four inches from at least one member of his party. Getting on friendly terms seemed fair enough.

Whilst he had a fag and I tried not to stare at his sleeve tattoos we discussed the state of affairs which had apparently got worse in this, his second week of holiday. He had been unable to acquire beds any nearer to the activity pool and this got us to wondering what god awful time those in the prime spots had actually arisen at.

There is a rumour circulating that people are setting out towels the night before. They must be German surely? It is a risky strategy as the wind here is truly phenomenal. It is not our first holiday involving wind, as detailed in the aforementioned post Wind Up. In fact I am starting to wonder if my husband is actually seeking out windy locations, this being our third in a row. That Rugby World Cup hoody is back in action. It looks a bit out of date now but it is still very serviceable.

With regard to sun bed reserving I hold the shop partially responsible as they sell beach towel pegs to fasten your beach towel to your sun bed. I have seen a number of towels flapping kite like from their pegged mooring,  Those beach towels carry a €15 deposit, not sure I would risk it. I like JJ the overweight Bulgarian entertainment team member as much as the next woman but not enough to risk that kind of wonga. I will forsake laughing at people doing spin in the water to ensure I don’t lose €75.

My new friend was off on a couple of day trips in the forthcoming week and he was looking forward to the lie in. I had to agree. Of course there are signs up forbidding the reserving of sun beds, the management reserving the right to remove unattended articles. Of course these signs are totally ignored. And some of the more moral amongst my holidaying compatriots actually sit on the beds from seven am thus getting around this issue. In any event can you imagine the mountain of beach towels and lilos (a particularly risky sunbed saving article here in the force nine gale especially the ones shaped like lobsters whose claws seem to catch the wind very easily) and sun hats and random bags that would be created if the management did carry out their threat? Aqua spin would be highly likely to be called off whilst they sorted all that out annoying a huge amount of slightly over weight women. I am sure the management have thought better of it.

I wouldn’t mind so much except that a huge amount of these reserved sun beds do not get occupied until I am going in for lunch, maybe they should start a rota system?

In any event I have it better than my new found sun bed chum whose party consists of his 20 year old lad and his girlfriend (who was indeed the member I spent most of the day lying four inches from which was quite annoying as she was, well, 20 and therefore didn’t paint me in a particularly favourable light) his wife and sister in law  (overweight, unfortunate sun burn lines, tattoos that were possibly once attractive why couldn’t I have ended up next to her? ) and his 16 year old daughter. He doesn’t get a sunbed for her because she might not turn up all day, and he is British and so has a sense of decency about these things.

The reason I have it better is because he was off to await the forming of the a la carte dining queue which, he informed me, he had been unsuccessful in on a previous three occasions. He had a new strategy planned and was hopeful. I shall look out for him in the all you can eat buffet later. That is where we will be eating every night.

I imagine sun bed man (who of course I did not exchange anymore words with once our families had arrived, for that would be weird) would probably also choose the buffet too. During our chat he agreed with me that the food is great.

Off to set my alarm. Good night.