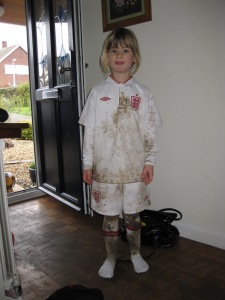 I have never been remotely interested in football. Well that is actually not true, more later, but in my heart I am not remotely interested in football. I can remember every Saturday evening as a child waiting for Doctor Who to start and listening to the man read out the scores. I liked the names of the clubs (especially the Scottish ones) and that you could try to guess which team had won by the way his voice rose up or down between numbers but I had no interest in what had led up to those tables of results.

My brother played a bit but I was not involved in that. Luckily none of my childhood friends, teenage mates or boyfriends were remotely interested either. We were too busy slaying dragons and exploding pineapples, head banging, drinking cheap beer and hiking through woods in the dark…an altogether different sort of passion…

I got to about 25 before I had to show more than the passing interest I had developed to survive in the world of work for three years. And that was because my partner at the time was a football nut. He was a life long Arsenal supporter, condemned to live in the north, and I either got involved or never saw him. So I started watching Match of the Day, went to away matches, entered a fantasy football team (I actually did quite well) and got myself clued up on the stars and rules.

It was with some relief, however, that I met my husband and could gaily give it all up again. As a result my memories of football are firmly routed in the time of Blackburn Rover’s spectacular rise, Peter Schmiechal and David Seaman and a crying Paul Gascoigne.

And I thought that was it, I thought I could wash my hands forever. Maybe taking just a passing interest in World Cups and the like if England got in or past the group stage.

When the football letter came out in Year 1 for eldest I binned it. Similarly a year later with middlest. And then he came home around January and said everyone was leaving him out in the playground because he wasn’t in the football team. So we went along and signed them both up. And that was the end of my football apathy.

Both boys started with their local football club. That first year lulled me into a bit of a false sense of security. We didn’t start until around February. Both boys were training in the same place and at the same time on neighbouring pitches. It was an hour and a bit out of a Saturday, done and dusted by 10.30am. And one of us got to stay home with youngest. In the warm.

It is now four years later and our lives are ruled in large part by the beautiful game. That’s youngest up there, aged 5, during her first season playing. To say she has enjoyed it from the start is an understatement. She remains the only girl in a group of around 15 lads slogging it out every Saturday. Meanwhile both boys now train in the week (on different days) as well as having fixtures most Saturdays, often in far flung places.  Eldest’s home pitch is no longer the same as his siblings’ so even concurrent home fixtures present a problem. We are often split three ways.

And so I turn out every weekend. I haul myself out of bed really far too early for a Saturday morning in order to freeze my parts off on an often windy, wet or snowy pitch to cheer on my offspring. I am an expert in the differing rules which alter as you move up through the youth football system. I can be heard shouting ‘Man on’ or ‘Mark up’ regularly.  My fellow soccer mums and I discuss the best footwear for the side-lines (the feet are always the first to ‘go’) and envy richer clubs with pop up dug outs and club houses with tea urns, bacon butties and even loos.

And leaving aside the very real physical discomfort there are things about it that really irritate. Like how the season seems to go on for ever- long after local councils have replaced the goal posts with creases and my kids are in danger of sun burn. That it gets really too competitive too early with A & B teams ‘cleverly’ disguised with different names, whilst the children are fully aware of the pecking order. That my kitchen floor is a mud bath by lunch time.

But to be honest I don’t hate it, well not after I have thawed out. The youth game is generally a civilised affair populated by committed and dedicated volunteers giving hours of their time to allow my offspring to enjoy running around in the mud. I am grateful to them.

So I get up and turn out so that my kids can enjoy the sport they all seem to adore- despite their differing abilities. I have mellowed towards football. I still don’t watch it on TV or have any interest in the fortunes of the professional game. But as a sport for my young kids to meet with their friends, get sweaty, join in the universal language of small boys (and girls), learn the hard lessons of losing and how to win graciously it has merit. So I will risk my lower digits for that.  As long as I have my insulated mug of tea and my sheepskin lined snow boots I can survive.

Footnote… And, no, I never got that kit vaguely white again…

One thought on “The Beautiful Game”