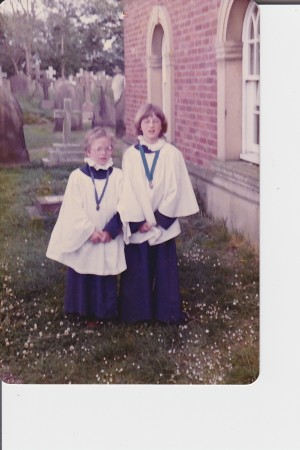 So here is a thing you may not know about me. I love to sing.

When I was small I sang in a church choir. That is my and my bro up there…he may never forgive me. It was a fairly serious affair involving cassocks and surplices and practices and two services on Sunday and often a wedding on Saturday. And rather thrillingly it also involved small brown envelopes containing hard cash. It was my first ‘job’ although it didn’t really feel like hard work. There was extra money for weddings.

I took exams and gained medals and rose to the heady rank of Head Girl Chorister before my family upped sticks and moved 200 miles south when I was 11. I never took it up again in the new place. Not really sure why.

Still some of my best memories of that period of my childhood come from singing in that choir. In fact the best of those was singing at sung evensong in candle light on a winter’s evening. I still have a fondness for hymns and especially psalms. It is part of the reason I go to church. To sing.

From then on in I didn’t do that much singing as instrument playing took over. Specifically double bass and for one school production percussion. Because my piano playing wasn’t up to scratch. That gig went to Rupert Wilson, he of the cello playing fame….we once did a turn in the school concert…him playing a beautiful rendition of The Swan from Carnival of the Animals and me following up with the double bass solo….The Elephant…well I guess I chose to play the bass….anyway I digress. In the event playing percussion turned out to be a blast especially banging on timpani. I often wonder why Rupert and I didn’t hook up forming, as we did, the bass string section of the school orchestra mostly single (double) handedly. But we didn’t. I like to think he still plays. His cello is probably gathering as much dust as my double bass.

Although now I think about singing at school I do remember that I was part of a quartet of street sellers in a production of Oliver in my fifth year. I can still sing the whole of my part. I was a milk maid. My boyfriend of the time was quite taken with my long dress and metal pail.

For a long time thereafter through university and work my singing was confined to the shower and round the piano at Christmas. I got a bit rusty to be honest.

Then Eldest came along.  There were many long February evenings when I was pacing up and down with a grizzly baby waiting for my husband to arrive home when I cranked up the stereo and sang along to my favourites. Frank Sinatra, The Carpenters, Crystal Gayle, Ella Fitzgerald. I like to listen to all sorts of music. But this is the stuff I like to ‘Karaoke’ to…even if only in the privacy of my lounge.

The others came along. I sang a lot of nursery rhymes. Wind the Bobbin Up? Anyone? We went to a mums and toddlers singing group which was fun. Eventually I progressed to Cub Scout campfire singalongs. But this was the extent of my limited singing opportunities. Life with small kids. Doesn’t leave much time for a social life.

Then about five years ago a flyer came home in the school bags advertising a community choir being held in another local school. I organised husband to get home in time and with a lot of trepidation set out to join. I expected a hall full of people. There were seven of them. Including the choirmaster. That brought its own issues. No where to hide.

But it was fun. We did public performances. I still go to that choir today. When I can get away on a Monday night. The choir now numbers around a 100 people. But it is still immense fun. We sing all sorts sometimes in Zulu, Spanish and most recently Maori. We do show tunes and folk tunes and a smattering of religious stuff. Rutter- my favourite. Some Mondays I almost don’t make it because the effort of getting out in time whilst juggling the kids’ stuff and often a late husband is nearly enough to tip me over the edge. But without fail I am always glad I made the effort. It cheers my soul.

All my children sing. Eldest and Youngest are in the school choirs. Eldest particularly loves it. Middlest has a great voice but is taking a sabbatical. We all sing once a month in our church all age choir with other families.

We have just returned from a practice with the church choir master ahead of Sunday’s family service.  ‘Go Tell it on the Mountain’ this time. The ages ranged from 5 to cough cough. We numbered 10 in total. It is a bit daunting for us to stand up in front of the congregation and do our turn. But we all still turn up.

Because there is really nothing like the buzz of singing in a group.

So now I have more outlets for my singing. But even so I can still often be found belting out a Carpenters track into my hairbrush whilst stirring spag bol. Because that is fun too.