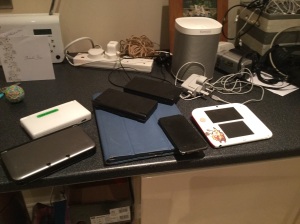 Well today is the day…

Along with the trampoline, I think I have mentioned that before, one of the things ‘promised’ to the kids when we moved house was sleepovers. That is us hosting sleepovers.

I have managed to get through 11 years of parenthood without once hosting a friend to ‘sleepover’. Cousins have stayed. Sometimes alone. We once had a friend’s child over in an emergency. But in terms of a ‘fun’ event, this is a first.

And the reason is quite simple. I really cannot think of anything worse. Or unnecessary to life in general.

In my childhood I never, ever had a ‘sleepover’ at my house. I am not even sure I went to anyone else’s house to do the same. And so the whole concept- excepting late teenage ‘sneaking around’ and ‘smuggling in boyfriends’- is totally alien to me.

I already have three children of my own. Adding more to the mix for an extended period just seems, well, daft to me.

So when Middlest decided all he wanted to do for his 10th birthday was cash in on that promise my heart sank. Not only did he want a sleepover he wanted four friends. Read it, four. Well, I thought, its the summer holidays some of them will not be able to make it. As the replies rolled in that became a faint hope. One boy was travelling back from holiday on the day and so was only a maybe but everyone else clamoured to say yes.

My usual style of birthday bash is a two hour affair at some place specialising in such events; soft play, kids’ farm, bowling, gymnastics centre etc. You roll up with a cake and party bags and some teenagers do all the work. Sort of. It is expensive but easy.

Today has been quite cheap, excepting the thirty quid I spent on junk food, but not quite so easy.

Middlest’s room currently has no floor. Well it still has a floor but it is not visible beneath the layer of blow up mattresses, strewn clothing, Pokemon cards and sweaty boys.

I set some ground rules early on. No sibling tormenting. No sneaking down in the middle of the night. And no electronics after 10pm.

The afternoon and evening has gone OK. They bounced on the trampoline a bit. Spent far too much time on electronic games. Watched a couple of DVDs and made great in roads into that junk food mountain. It strikes me as very odd that essentially kids just like playing in their own world in the vicinity of each other. Rather than actually playing together cooperatively. But, hey, it kept them mostly contained so I could build my Lego Lake Town.

They have now brushed their teeth and I have extracted all the devices from the room. It wasn’t easy. One of them had an I pad in his sleeping bag. He was grassed on. That is the cache up there….not bad for four small boys…

Middlest has asked me to have custody of Ellie and his other cuddlies. He has never to my knowledge spent a night without Ellie in his entire life. I asked him why. He is worried they might come to harm.

They are now ‘settling down’. The thumps from the room sound as if they are coming through the ceiling. It is past my bedtime. I am writing this on an I pad so sticky from allowing youngest to play on it earlier (so she wasn’t left out) that some of the keys keep repeating themselves.

These are naice little boys. They have behaved well and used manners. But soon I am going to have to out my foot down. Quite hard. Forgive me if the earth tremors.

Footnote…. I just went in to give them a 30 minute lights out warning….the fug is awful…. Ellie and I are retiring….he is quite forlorn….poor thing….he is not alone…

One thought on “Sleepover…”